“Wendy?”
“Oh I miss those days – my father put me on a pedestal and my sisters could never understand why I would want to be there day after day. It was because, I was a poet at heart.”
“What do you mean by that?”
“When I think back on those days and those nights…” Her eyes began to well up. “There was so much…there was a sense of family among the strangers. I remember the lawyers, the writers from The Eagle, the students – you and your friends and the nurses from Mount Sinai. They were regulars…you were a regular. My father really loved talking with you. He used to talk about you to my mom all the time.”
“Well, it was mutual – I used to come in just to speak with him, ask his advice, talk about sports. He was a gent.”

They spoke for what seemed like ten minutes but was actually four hours.
“Wendy – we need to go home.” The manager told her.
Henry paid the bill and left a tip. They walked outside and there was a chill in the air. He pulled his jacket off and draped it around her. She smiled.
“I always remember how you were always so nice to me. You were also one of the few who never got sick in the bar.”
“I am not a drinker. I was nice to you because I found it so adorable how you would be working like an adult and seemed to be loving every minute of it.”
She stopped walking and faced him.
“So, now that you left your cheating wife – how are you getting along?”
“Well – I am feeling kind of lighter…and being with you tonight just reminds me that there is still a spark of life and love in this world. And you got my heart aflutter…” He felt a sense of excitement – a sense of trespassing into another person’s world – a person he always wanted to be but never took the steps out of fear. No more fear – his new mantra.

She smiled – he kissed her and she opened her mouth for him. He felt alive for the first time in years. They kissed standing up in the middle of a quiet sidewalk. They kissed in that same position and they each felt their world changing. He felt her tongue and he felt her breasts against his chest. She felt his excitement and felt her breasts against his chest. She wanted him inside her – he wanted to go inside her. 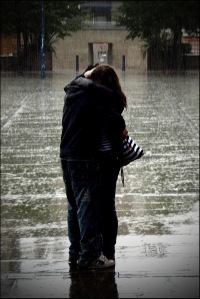 He fell to the ground and all was dark. She knelt beside him and let out a silent scream. He opened his eyes and felt a rush of adrenalin.

2 thoughts on “At the End of the Day Chapter 4”