We started going to opening day – NY Mets opening day around 1996 or so. At first it was my two son’s and myself. Then in 1998 we “allowed” my newly pregnant wife to join us. She disliked baseball but wanted to share in our ritual. The temperature was a hot 88 degrees and there was not a breeze to be felt. Our seats were on the right field line which meant no shade either. The smell of the hot dogs being carted around, the calling out of the beer vendors, the rowdy fans and the sweet smell of the green grass. Aah – Baseball! 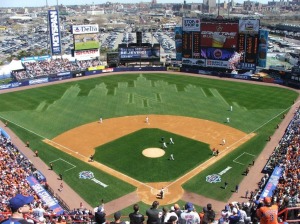 As the game began a bunch of big guys were drinking beer – two at a clip. As each inning passed they became drunker and louder. My wife, two months pregnant, sensitive to any smell, was nauseous from the smell of the hot dogs. She was overheated in the sun, bored to death from a scoreless game and suffering from allergies. She wasn’t having the time of her life, lets just say that.

We left after the ninth inning – a scoreless game which ordinarily is a great baseball game to watch – but this day, March 31, 1998 – it was hot and we were exhausted from sitting under the sun for three hours. Most important, my wife was miserable – and I love her too much to make her stay for extra innings. As we got into the car we turned on the radio and heard Bob Murphy tell us that Alberto Castillo had just won the game with a base hit.

The air-conditioner was on, we all got cold drinks to cool us off and the Met’s had won opening day. But the sweetest part of the day was knowing that a year earlier it was me and the boys and although I always enjoy our time together; there was always something missing. And now, opening day 1998 – there was a beautiful lady with us and she was carrying our baby – a future Met’s fan.

What more can you ask for? Baseball, your best friends and a beautiful girl by your side.