My very first memory of listening to music was the sound of a nasal voice telling me about his 115th Dream. “I was riding on the Mayflower When I thought I spied some land…” It tells the story in a humorous way with waitresses who were handsome and pulling down pants for collateral and so many other descriptions. On the album cover was a picture of the singer, Bob Dylan and a lady smoking a cigarette. (Dylan’s manager’s wife) 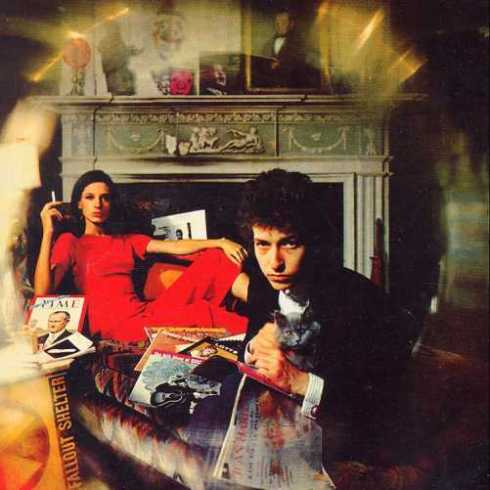 The songs on this album are divided by Side One being electric and Side Two being acoustic. I would lay on my brother’s bed and listen to the album over and over.  I learned each and every lyric and to this day I still expect the songs that would skip because there were scratches on the grove to skip at that same point.

“Blood on the Tracks” was my next Album that cemented Mr. Dylan as my teacher, my adviser and my friend. He told me in his words that pain is part of life and the deepest pain is the pain felt when love is lost, betrayed or all just an act. In the end it all works out as “Tangled up in Blue” tells the story of the narrators different relationships with girls of all types – in the end still being magnetically forced to go find her – whomever that might be. Perhaps realizing that there are never exact matches between people. Accepting the differences and embracing the love and passion.

So now I’m goin’ back again
I got to get to her somehow
All the people we used to know
They’re an illusion to me now
Some are mathematicians
Some are carpenters’ wives
Don’t know how it all got started
I don’t know what they’re doin’ with their lives
But me, I’m still on the road
Headin’ for another joint
We always did feel the same
We just saw it from a different point of view
Tangled up in blue

In 1997 Dylan began an amazing string of albums that defied the laws of talent, ability and established him as the never-ending fountain of talent for a new generation – once again.

Between 1992 and 2012 he released 21 albums – seven of which were original material. So in 1992 he turned 52 years old – thats when he went to work. Now at 72 years old – still touring, writing songs,  selling his original art and apparently writing the second part of his auto-biography- he is still at the top of his craft.