The diner opened up in 1956. Alexander Drakos was a 25 year old son of Greek farmers who had been serving food at their home for their whole life. Alexander decided he wanted to move to New York when he was 15 years old. At the age of 19 he took a plane from Athens to New York City. His Uncle Stavros had a small diner in Queens and that is where Alex got his start. He worked with Stavros and lived in his apartment along with his Aunt and their seven children. After working and living with his Uncle he met Agape. She was a 17 year old second cousin of the Drakos family. She was dark skinned, slender, almost 5 feet tall and had the bluest eyes – “even bluer than the sky over Patras.” They married after 2 weeks of getting to know each other. It was a month after that Agape’s father gave him a briefcase full of One Dollar bills, actually 99 thousand and 23 of them, and told him to go start his own business.

With Agape by his side they set upon Brooklyn and opened up a “Greek Diner” where an old clothing store once stood. On March 14th 1956 they opened the doors and served their first cup of coffee at 502am to his Uncle. The dollar bill still is posted on the wall behind the register. Agape first saw the jukebox at a dance club in Manhattan. She thought about how it could be such a great way to bring in some extra money while also being able to hear the latest songs. She loved the new guy Elvis Presley and Bill Haley and the Comets. She decided one morning as she worked in the Diner that they would invest in a jukebox. 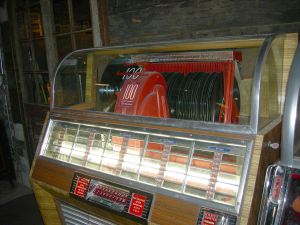 One evening as they were closing shop – Alex put on a slow song called, “Love me Tender.” With the door locked they danced and then made love on table 9 as Elvis sang the words, “Love me tender, love me true, all my dreams fulfilled. For my darlin’ I love you, and I always will.” The love between the two of them would resonate through the years. The diners sensed it and came to feel it more than to taste the Baklava. When their children began working there it became a sense of responsibility. That is when love became work and Alex found his way to different tables at closing time with different waitresses. Agape knew about this but looked aside – she knew he would always come back to her and she would be there to receive him.

In 1976 they celebrated the US Independence Bi-centennial and Patras celebrate 20 years in business. Agape looked on as the sailboats and ships from around world descended on New York Harbor on the 4th of July. From a distance she saw an old acquaintance and she smiled and he smiled back. A year later she left Alex and she ran off with the acquaintance to Greece and didn’t come back for six months. She moved back in with Alex and they stayed together, exclusively, until he passed away in 2004.

Brenda and Eddie walked towards “The Pat” as they called it back in high school. Eddie had not been in there for several years and Brenda had not set foot inside since the night she climbed out the bathroom window. They saw the sign up ahead as they walked slowly up Kings Highway.

“How many times did we walk this walk to the Diner?” Eddie asked her.

“I could not even tell you – is Alex still there?” She asked.

“I heard he passed away a couple of years ago, some sort of cancer. Fucking cancer. My mom and my Aunt both died on the same day in 1999 – which in a sense was good for them since my brother and my cousin both were in the towers on 9/11. Both worked for the same investment firm and both stayed behind thinking it would all be ok.”

“I remember reading about him in the Times. I was going to call you but I didn’t think it would be appropriate.”

“Yeah and my cousin Kevin. Both engaged to be married- both lost their mothers on the same day and died together. They called them heroes at their funeral. They weren’t heroes, they were hard working guys who were trying to make a living. Trying to make a future for themselves and their families.”

“What I have come to learn in this fucked up world is the heroes are the ones who get up each day, look at their responsibilities and do whatever it takes to fulfill them. Not by screwing others but by living an honest life and somehow making the world a little better.” “Yeah…well.”

“My Pop is a hard ass Irish old man who looks life in the eyes and dares it to knock him down. That is after he finishes his Hennessy”

“He used to look at me and then walk to your mom and Irene and him would give me this nasty stare.”

“Hmm…and all this time I thought I was special.”

“Nah – but you should have heard them consoling me…the words they used to describe you would make a truck driver blush.”

“I guess I deserved that.”

“Wow…it hasn’t changed at all.”

“Well I think they nailed down the bathroom windows shut since then, though.”

They opened the door and were taken aback by the man behind the register. “Welcome…Eddie! How are you? Do you remember me?”

“Junior, Alex Junior. I know; I constantly get this look as if people are seeing a ghost. Its a blessing to be able to say I look like my father”

“I am so sorry about your father, I used to come here all the time when we were growing up.” Brenda said.

“This is the one that got away.” Eddie said pointing to Brenda.

“The one – Brenda? Of Brenda and Eddie?” Eddie nodded and Brenda looked down. “You are a legend here!”

“Thanks…I don’t know how to take that.”

“My father told me you were the most beautiful girl who ever came in here. I can see he wasn’t lying and you don’t look at day over 30.”

A middle aged lady slapped him playfully across the back of his head. “Stop creeping out the customers Al.”

“This is my wife, Eileen. Eileen these are the celebrated ‘Brenda and Eddie’.”

“From the Billy Joel song?”

They sat down at a booth near the same jukebox that Agape had bought back in 1956. There were some songs that remained the same despite the years passing – and when Eddie stood up to put on a song, the song that he pressed was B52.

“What song did you put on?” Brenda asked.

“You’ll see.” They ordered two coffees, a slice of chocolate cake and a slice of Cheesecake. The song playing from the jukebox was Elton John singing about Daniel.

There was one waitress sitting down on a bar stool, wearing reading glasses and working on a crossword. From time to time another man would come out of the kitchen and try to answer a clue, give her a kiss on the head and go back to work. The tables were empty save for Brenda and Eddies and several others which were occupied by a middle aged couple, a table of around 6 boys and 2 girls in their late teens and a lone man sitting and reading a book. It was the Diner at 1145 PM on a Friday evening.

The song winded down and the record was changed automatically, the look on Brenda’s face as B52 began to play was one of panic. “Come on, lets have that dance that we should have had that night.”

She hesitated. “You owe me at least a dance to the song I proposed to you to.” Eddie said as he extended his hand.  She lifted her hand towards him and they stood by the jukebox – surrounded by the faces of bygone celebrities covered in dust from the years past – and he held her against him as they swayed to Elvis’ voice.

They sat down after the song and some wiseguy followed that selection with another Elton John song, “The Bitch is Back.” They laughed at it and then noticed it was Eddies friend David that chose the song.

“David!” I didnt see you at the dinner tonight.

“I just landed around an hour ago – I needed to come straight here – the scene of so many teenage crimes. Brenda you look amazing.”

“Amazing for a bitch, you mean?” She said with a chuckle of false resentment.

They kissed and exchanged a hug. David introduced his wife to Brenda – Eddie already knew her as they had stayed friends since the “Old days.” They all sat together and spoke about their lives since, how fast time goes and how their children were now their age and older when they would hang out together. They spoke about some old times, but stayed mostly on topic of current events. Brenda spoke about her husband and her children and they exchanged pictures. By the time they walked out time had reversed itself and it was as if it was just another night at the diner circa 1979. Only now there we some grays, wrinkles and extra pounds added to the mix.

Eddie walked Brenda home and they said goodbye at the door.

“I am glad we had this chance to say hello again.” She said.

“I am as well – if only just to say goodbye on equal terms.”

“Hmm I’ll be the one with the ozone killing hairdo and a face with way too much makeup.” “Two clowns in the same circus from the same ancient era.”

She leaned in and kissed him softly on the lips. Sad-smiled him, turned and went inside.

Eddie walked along the streets – with the sounds of sirens, barking dogs and squealing cats. Car alarms and car tires screeching. Brooklyn, the place where he was born and moved away from. After college he moved to Great Neck and commuted to New York 5 days a week. He missed the Brooklyn he grew up in and was thankful for the Brooklyn that never left him. Great Neck was beautiful but its identity could be somewhere in New Jersey or any other state in the country. Brooklyn was “Fucking Brooklyn.” The place where the Irish, Italians, Jews and every other immigrant always ended up. It was an International Pot-Luck mixture of persona’s and cultures. He laughed.

A door to a home slammed closed and a squirrel jumped from a tree. A strong breeze blew some leaves around and a plastic bag was airborne. He was staying in the city and was walking towards the El on Avenue P. It was getting cooler now and as he ascended the stairs to the platform he could swear that time had stood still. But when he was on the train and heading towards Manhattan he looked across the graveyard and noticed the twin towers were gone. He closed his eyes, said a prayer and shed some tears. 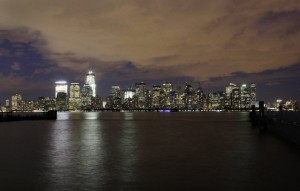