When He Was Just Daddy

Friday afternoons we couldn’t wait to hear the front door of apartment 2D open. My mom would be in the kitchen cooking up the Shabbat meal and we would be in the living room, sitting on the long couch killing time. Suddenly the door would open, “Hello?” his booming voice setting the apartment into a celebration.

A giant would walk in with shopping bags filled with goodies for each of us. He would always pick one thing that each of us loved and he would buy it, buy it, and buy it until my mother would say, “Sam enough.”

The bags would be from the, “Pushcart store” in lower Manhattan.

Preparing for Shabbat, he would then go to the bathroom to shave. One leg up on the closed toilet the other on the floor. I remember I used to watch him shaving and we would talk. I don’t remember what about, I only remember the time spent that I looked forward to.

We knew he was ready to go to shul when we would smell his “Old Spice” after shave; that sweet smelling aroma, that would somehow make its way to your tastebuds, tiptoeing on the edge of your tongue.

On Saturday I remember seeing him in Ahi Ezer synagogue, sitting with his brothers all in one row. They seemed like royalty to me. My mom would sit in the corner on the second level and I would spy my father looking at her and throwing kisses to her during the prayers. He would spot a little kid running and he would give out his laugh, “heh heh heh, look at that little snot nose!” If anyone would yell at the kids to be quiet my father would tell that man, whoever it was, that the “kids are the future of the synagogue. Let them be kids and don’t you dare yell at them or you will have to answer to me.” I was always so proud of him because he stood up for the kids and, well, I was one of those kids making noise and talking incessantly.

Saturday nights, my mom was off duty from cooking. But that was cool, because it meant Daddy would make “English Muffin” pizza.  There was a process to this.

First he would toast the bread. While it was in the toaster he would grate the Muenster cheese and open a can of tomato sauce. Once the English muffins were toasted he would spread sauce and top it with the cheese. Once the pizza was served he would walk to the el on east 16th and Kings Highway and pick up the “Night Owl” edition of the Sunday Daily Newspaper. I used to walk with him and I remember it being hard to keep on pace with him as he bounced back and forth.

At home we would all sit and watch the Saturday night television line up which included All in the Family, Mary Tyler Moore, Bob Newhart and then the Carol Burnett show. It’s strange but even today when I see old footage of one of those shows, I can still taste the English muffin pizza.

Sunday morning I would go with my father to buy bagels. We would go into the big 1966 sky blue Chevrolet Impala and pick up a dozen or so of the hottest bagels. As we drove back he would let me sit on his lap behind the steering wheel and pretend to drive. As we passed our building he would honk the horn in a musical, “Shave and a haircut, two bits.”

He would soon be off to work and my mom would spend the day making sure we were busy and content. She would take us to Kings Plaza, to a movie or just for a small picnic in Marine Park.

At night I would drive with my mother and go to pick up my father from work. He would always be so happy to see my mother – at first he would seem inanimate as he made his way to the car, but once he saw my mother his eyes would emit that glow and his spirit would perk up.

There were times I would call him “Pop,” but the majority of the time he was Daddy.

As I grew up I believed that I had a superior intellect and understood the world so much better than he did. He was naïve, trusted people too much and was always smiling. It was annoying to me and I felt  as if he was being taken advantage of.

I knew better and would be smarter and more successful than him. I was not naïve and the skepticism I possessed would help propel me into the stratosphere with the big boys.

Little did I know the genius behind the smile, the courage that it took for him to smile and the effect it would have on us and anyone who would be touched by it. When you are faced with obstacles and challenges as he was – it takes a specific understanding about life and God to be able to rise above it all.

When my life took some U-turns and I found myself out on the ledge of some peak which seemed to be beneath the earth and sea – I had no guidance, or so I thought.

I would look to my father to try and gain some insight, some idea of what I should do and how I should act.

He would just smile and say, “Don’t worry.”

When I began to shake and have anxiety attacks he would tell me, “Don’t worry.”

When I was depressed and felt abandoned by love and happiness he would smile to me and say, “Everything will be alright, kilshe be Allah. Everything is in God’s hands.”

I could not, would not understand how he could be so calm when I was going through a tornado of emotions.

One day when we were alone in the office I had a conversation with him. It was then that I began to comprehend.

“Daddy, how did you get through all the tough times?”

“My father always told me ‘Kilshe be Allah,’ have faith that God is guiding you and leading you towards your destination.”

“But come on Dad, didn’t you ever get sad or depressed?”

“Let me tell you something, everyone has the blues, you can either drown in them or learn to swim. You need to pick yourself up and just do the right thing all the time and Hashem will take care of you.”

You taught us how to love by loving our mother as much as you did. Expressing your love to her constantly. Chocolates, flowers, kisses and singing songs to her.

You would sing to us when we or one of our friends brought a girl over on Shabbat, “Once you have found her, never let her go.”

That smile, even in your sporadic moments of confusion you would see one of your children or grandchildren and your eyes would light up and you would smile, that magical smile.

Even in your sporadic moments when the train would not stop moving, you would see Mommy and throw her a kiss, eyes beaming and a smile like a ray of sunlight from you to her.

When we were growing up we would hear you giving us blessings early in the morning as we slept. As you got older you began to give those blessings to the people who you knew, the stranger and the ones who needed to feel as if someone cared about them. Jew, Catholic, Muslim, black, white, Hispanic – it made no difference to you. We were all created in the image of God, you would say.

It took me a long time Daddy, but I finally understand why you had that smile on your face. You made it look so easy to smile but it took so much courage, so much strength and so much faith to manage it. Your smile became the light that changed the world, Daddy. You made so many people’s lives better by throwing that Sam Zalta smile their way.

To the world you were Sam or Mr. Zalta, or the Mayor of Kings Highway. To us you were Daddy, our Daddy.

But it gets better, Daddy, because there are those that call you “Grandpa” who you have touched in ways that they will never forget. They will live their lives as you inspired them. They will tell their children about Sam Zalta and the ways he changed the world. One smile, one magical smile at a time. 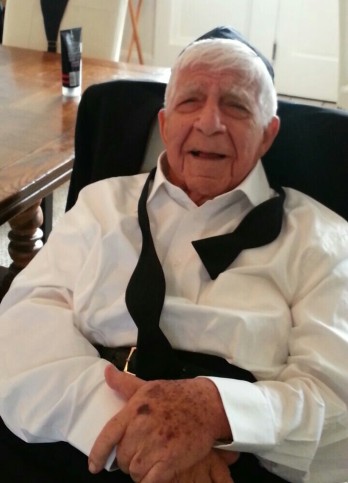