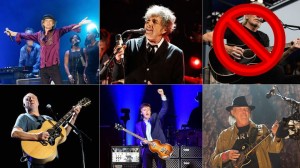 Goldenvoice, the organizers of the Coachella Music Festival, are in talks to bring Paul Mcartney, Bob Dylan, the Rolling Stones and Neil Young among other to a festival at Empire Polo Field site in Indio California, on October 7th through 9th.
the Los Angeles Timesreports that Dylan and the Rolling Stones would be opening the festival on Friday night, Neil Young and McCartney Saturday night. What is perplexing is the inclusion of former Pink Floyd member, Roger Waters.
Roger Waters has been obsessed with condemning and working to hurt Israel since he saw that Israel had put up a “wall” to keep the Palestinians from infiltrating Israel. He seized on this to finally get some post-Pink Floyd recognition and attention. Its sad when a musician has never lived up to the expectations and needs to use hatred as a way to get attention. Waters has no place among the rock-n-roll legends due to perform in Indio. What has he done in comparison?

Bob Dylan, Paul McCartney, The Rolling Stones, Neil Young, The Who and then they add, Waters? For which accomplishment? For “The Wall?” Please!