A Journey towards a personal “Do Over.”

Wild men who caught and sang the sun in flight, And learn, too late, they grieved it on its way, Do not go gentle into that good night. – Dylan Thomas

On March 4th I was climbing the stairs from the L Train platform in Union Square heading for work. As I reached the street and the cold wind blew – I felt a stabbing acidic pain in my upper stomach. 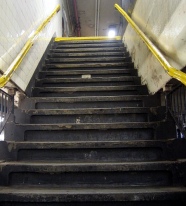 As I made my way towards “The Bean” to get my cup of coffee I needed to stop and breath. When I mercifully made it into the cafe – I sat down and collected myself. Was it anxiety? The pressures and the stress I put on myself are kind of intense at times. I have always been the kind of person who truly expects more from myself and others when I know the potential is there. I know my potential should take me further that a cubicle cell – but my reality and my responsibility are the bars that restrain me yet also set me free. I collected my thoughts and my large coffee and went to work.

The day was typical and I had no other issues. The next morning came and the same thing happened. Walked up the the stairs towards Broadway and found myself stopping half-way up to take a deep breath. As I walked towards my Coffee the wind blew hard against me and the volcano once again erupted. I stood against the doors of the Union Square movie theater on 13th and Broadway. I stood there and tried to breathe my way past the “Anxiety” I was feeling. I slowly made my way to The Bean, got my coffee and crossed the street to my office. I sent a text message to my wife, “Its amazing how anxiety can have an effect on the body.”

Later on that day I went for a walk during my lunch time and found myself feeling that burning sensation once again. As I walked I thought to myself could the stress have brought on an ulcer?  I ended up not eating that day and when walking towards the train station on the way home, I began to feel that feeling once again. It was then I realized it was not anxiety based.

The next morning I called my Doctor, Doctor Michael Konig and made an appointment. I parked a block away from the office and upon walking there the pain returned. When I explained my symptoms to the good Doctor he gave me an echo-gram. He told me I would need to have a stress test after the weekend to make sure the issue was not heart related. I asked if we could do something right away and he had me walk up and down the stairs of the office. He then took another echo-gram and told me he would recommend an Angiogram to discount his concerns. My question was when should I have it done? His answer – “You can wait until after the weekend or you can go right now to the emergency room.”

“What would you do?”

“I am 90 percent sure it is something to do with your heart. I would go right now and get it checked.”

I called my brother Marcos and told him that I would be going to the hospital. I then called my wife and explained to her the situation. I walked to my car, felt the pain and began to cry knowing that something major was happening. When I picked her up I told her to drive and I explained to her the situation. I cried because I was scared – this wasn’t someone else who was in this situation – it was me.  I was scared and all I could think about were my wife and children.