She walked up the stairs, swiped her metro card and made her way up the stairs to the platform. As she walked towards the front end so she could get on the second car of this F train headed to Manhattan, she felt the cold winter wind snap at her. Pulled up her collar and wrapped her arms around herself bracing for the cold.

She was wearing blue jeans with boots over them – a small black ski-jacket with a red scarf. Her hair, shoulder length blonde was covered by a knit cap, also black.

It was the 5th or 6th month of her working at the Union Square Barnes and Noble. She still wasnt even sure what her role was there, her title was “Music Manager” yet there were two other “Music Managers” there as well. She enjoyed working there because she loved to see so many people enjoying the books, music and the other stuff that they sold there. She also loved to sit during her breaks and read. She loved to read anything that was written around the 1920’s. F. Scott Fitzgerald, Ernest Hemingway, Gertrude Stein, T.S. Eliot, Edith Wharton, and so many more.

She had always felt “different” from her peers and this caused her to find herself alone some nights watching TV or forcing herself to write on her blog.

Sophia was 26 years old and had graduated from Kingsborough College 4 years earlier. She had thought about graduate school but then realized that she really wasn’t interested in any specific degree or even future.

She had been diagnosed with depression back when she was 16 years old. She had never tried to kill herself nor hurt herself but would spend too much time in her room and away from any social life.

When she was 18 and a freshman at college she fell in love with Mitchell, a senior with four different girlfriends and a future as a politician. When she found out about one of his other girlfriends she broke up with him. It was a couple of nights later that she found out about the others while browsing through Facebook. The fact that she had been so blind and naive to not even catch any clue that he was actually dating 3 other girls, hurt more then the loss of having him around. She was hurt and she closed herself off from any social life after that.

“It wasn’t the fact that he was with the other girls, it was the fact that I was stupid enough to fall for someone like that. Thank God we never had sex – that would have really put me under.” She had told this to her therapist and the therapist only cared about asking her. “Why didn’t you have sex?” She felt creeped out and stopped seeing him.

Her friends tried to bring her out of her slump but it was way above their ability. Love can heal all things but some wounds can only be soothed not healed.

The darkness in her room followed her  wherever she went.  It wasn’t until her 26th Birthday when she decided to go to see a different psychiatrist, a female Doctor this time. Towards the end of her first appointment it was suggested that she should begin taking medication. She felt she could help herself without taking any medication.
“When you feel you want to try them out you just let me know. We would begin with a very low dose…”

She saw the train in the distance approaching in its snail like pace. The wind, the cold and the clouds all conspiring to make it feel as if the train is at a standstill just two blocks or so away. Finally the train crawled in and came to a stop; the sound of the doors opening, the electronic ding-dong and the voice – “next stop Avenue N, stand clear of the closing doors.” 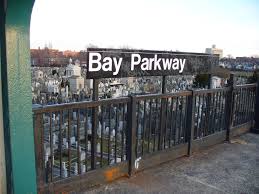 She finds a seat by the window of a two-seater row. She likes to look through the window and watch as the different scenes come into view and just as quickly disappear. It reminds her that her’s is not the only world that exists. That the world does not truly revolve around her. She watches as the train rolls along McDonald Avenue; school van picks up children, two people are sitting eating breakfast on a second floor apartment directly across from the train. She concocts different ideas of what they are conversing about – are they expressing happiness and love or are they scared and feeling alone?

She looks inside and sees an older man reading a hard cover religious book, perhaps the Talmud or something? Two seats to the left of him is a Haitian woman speaking on her cellphone in Creole – really loudly. He looks towards her and nods his head in disapproval. Down the way a large man sits eating with his jacket open revealing his sizable girth, as if in pride? he is downing a bagel and licking the cream cheese to avoiding it from spilling over. He has a Yoohoo chocolate drink in between his legs and is in some sort of comatose gorging ecstasy. A lady is applying makeup to her cheeks and when the train stops at Avenue N she draws her eyeliner pencil under her eyes – framing her Asian eyes with the imperfect blue she decided to use.

Avenue N and the doors open to a black man wearing a yarmulke and looking Jewish but for the color of his skin, in these parts at least. He is of Ethiopian descent and is Orthodox – she knows this because she once heard him speaking to another passenger on the train. A fifty-ish lady walks on and is, of course, on her phone giving orders to one of her children, it seems. Sophia looks away and checks her phone – no alerts, no emails, no missed calls. “Next stop Bay Parkway.”

Across from her on the other side of the train, she can see the Verrazano Bridge and outside her window she can see thousands of graves lined up. She thinks about their lives – mothers, fathers – they were all once babies who needed to be fed, dressed and changed.

“Snap out of it! She tells herself.” She stood up as if to wash crumbs off of her clothing – shook a bit and sat back down again. She would not, could not allow the darkness to seep back in again. It always began with a thought…since she finally gave in and had been on meds for a little over a month, the fog had begun to lift a bit. A bit. The “low dose” had been doubled since her first week and now she began to “See a little clearer, is that one of the benefits?”
“You are seeing more clear because you are not running as fast as you used to. You are slowing down and able to live at a healthy pace. So now the colors you once defined as green, yellow and blue have a deeper meaning to you, am I right?”
“Yes, its as if I can focus now>”

She looked out the window, looked back into her bag and took her book out. “The Corrections,” she had yet to read it but loved the title. In her mind she had pictured it as someone in the middle of their life who decides to make “Corrections.” She was afraid to begin reading it because she knew it wasn’t about that, specifically, and preferred the definition in her head.

“I am making corrections these days.” She thought to herself.
The fact that she decided it was time for her to take the leap and swallow a pill once a day was proof in itself. “I want to be the best I can be, to enjoy life…” Lately she has been having vivid dreams – only to wake up, try to remember only to forget quickly.

The train goes underground and where once she would get anxious she now welcomed it as if an embrace.

“Too many stops to go until I find my way…” She heard a voice inside of her say, or sing? Or was that the lady behind her?

“Too many corrections to make within myself so I can even begin to find my way anywhere.” She thinks to herself as if answering someone.

“Corrections…yes…can it be as simple as that? Look within myself and accept what is wrong and right and make some corrections?”

She walked off the train at 14th Street and found her way upstairs and out onto 6th Avenue. She walked east towards Union Square and felt the cold air hitting her face – feeling like a pale of freezing water in the August heat.

She feels a bit more at ease and knows that there is a change happening and it could be from that small pill. A sense of hope, not full blown hope but a ray and that is more than she has felt in a long time.

She looks across Union Square and sees the celebrations of everyday life on display. Men painted in silver and gold, a clown dancing or riding in a small child’s bicycle, chess players lined up and waiting for challengers. People walking quickly chasing time trying to catch up or outrun it. Cold wind blowing pieces of paper high up – churning around and around.

She looks up, crosses the small street, smiles at the guard, opens the door and walks inside.

There are countless stories of people in this world chasing memories, dreams or hopes that were once so vibrant – now lying dormant on the side of empty streets. Ghost towns where youth and optimism were once at play in the streets where dreams were erected only to fall in a lost battle against the ultimate thief – time. Sophia turned out to be one of the happy stories in this world…she ended up meeting her cousin at the store that same day. He was with a friend of his named David – he smiled and she smiled back. Sometimes good things do happen and they happen when you least expect them to. She is still working on her corrections and has yet to even read the first page of the book.

One thought on “Corrections”