Lydia bought herself a chocolate frosted Entenmann’s cake for herself the night before she would be celebrating her 70th birthday. She didn’t expect anyone to remember her birthday aside from her children. They would reach out to her with the obligatory indifferent phone calls, force their children to get on the phone and mimic what they were being told to say.

The only one who ever cared or at least did a good acting job of it was Theodore. It was the one day in the year when he would avoid hitting or verbally abusing her. When he died on her 65th birthday, it was the best gift he had ever given to her.

She remembered her father and the love he always lavished on her mother. The flowers, the hugs and the kisses. The notes left around the house and the stolen moments they would spend alone. True love defined. She missed them…it had been almost 20 years since they both were killed when their car went off the highway in Staten Island.

Her daughters would call her daily and send her their love; never once listening to any answers to the mundane questions they would pose to her. If she was able to get a full sentence out about her own well being it was a rare occurrence. He sons would call as well, maybe once or twice in a week with insincere invitations to spend some time together.

Lydia was an artist who loved to sit by her easel, canvas white but for her vision. After some hot black coffee the visions would be born…there were the flowers in vases, small cafes in an open area – windows on the second floors of each establishment – each expressing a separate scene, a separate life of their own. Silhouettes of a lady, a window with a shelf of flowers, two lovers dancing and other scenes all dependant on her mood.

It was on her 66th birthday when she bought herself “Groucho.” Groucho was a Yorkie who was being sold by her neighbor in the building where she lived. She looked at the Yorkie she realized how lonely she was by seeing how lonely the little pup seemed.

When she moved into the building, while Theodore was still alive in the hospice, she felt as if the walls were closing in on her. Although the sounds of the neighbors, the occasional company in the elevators or in the mailroom had been strangely comforting. She missed the whole idea of having someone with her – but sure as hell did not miss the son of a bitch.

Anthony was an old school Italian man. He was born in New York City on the day the world and history would remember as “The day that will live in infamy;” December 7th 1941. His father was an older man tried to enlist into the army but was rejected due to his being 52 years old.

Anthony met Marie at Church one Sunday when he was 19 years old. He had been rejected by the army because of a leg injury that left him with a limp. He was one of the few 19 year old men at the church and when they saw each other he told his father that he would be marrying her. His father nodded and spoke to Mr. Berentelli right after church that day. The two families went to dinner at the same restaurant (without the kids knowing) and when the fathers greeted each other they combined tables. Anthony sat next to Marie – few words were spoken, their hearts pounded, they felt a strange uplift in spirit and their eyes look into each other as if they knew.

Anthony and Marie were married for 50 years when she felt a thrust of pain run up her chest, fell on the floor and died. Anthony was lost. He had never lived alone and had been “Mothered” his whole life. Now he found himself alone in a home where Marie and himself had spent their lives, raised 4 children, celebrated and mourned life’s twists and turns and loved one another.

Anthony was not the best communicator and was an old fashioned father. He didn’t want his childrens love he wanted their respect. He ignored their invitations to live with them after their mother died, saying he preferred to live alone.

A year after her death he put his house on the market and decided to take a one bedroom apartment in a building several blocks away. Since him and Marie had a dog, “Ike” (named after Eisenhower) it was the constant reminder of a life once shared with her. The kids, of course, but they carried too much of a responsibility to talk to, to give money to and to advise on things that he didn’t understand while he was going through them, much less now that he had gotten older.

Anthony was walking Ike one day on Ocean Parkway and began to feel pangs of sadness. He was not complete without his Marie – he was still feeling a sense of withdrawal from her departure. Still could not sleep on both sides of the bed, still could not sit by the table for meals and still made sure the space next to him in church was left vacant out of respect.

The day he moved out of the house was like a bandage being pulled from an open wound. He held in his tears until he got into his apartment, locked the doors and fell to the floor. He stayed inside, boxes still unpacked until his daughters showed up to help out. 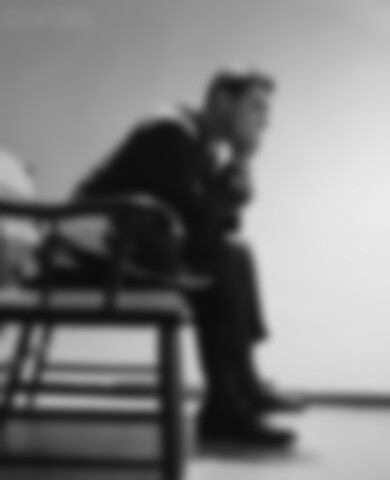 It was in the middle of February and the temperature had turned into a very unseasonably warm 63 degrees. Anthony pulled on his sweatshirt, his derby hat and placed the leash on Ike.

“Come on now Dwight D – we are going to go breath in the fresh air before the cold air comes back again.” He walked towards the elevator, pushed the call button and stood there waiting. Whistling a tune from another lifetime he smiled as several memories came racing to him. The elevator bell rang and he stepped inside the empty car.

Lydia was in a singing mood and when she picked up Groucho’s leash, connected it to his collar and opened the door to go for a walk.

Lydia was singing “Summer Time and the living is Easy,” when she pushed the elevator button. The car arrived and there was a man inside with a dog.

One thought on “Anthony and Lydia – Chapter 1 – Lydia, Groucho, Anthony and a Dog Named Ike”