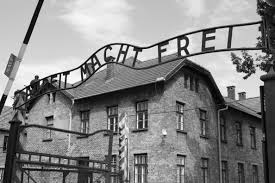 As we honor the victims of the Holocaust on April 27 we honor not only what was lost but what was never created.

The smoke rises from the earth and the cries echo towards the heavens as the ashes dissipate into the ground. Ghosts of infants uncarried, unheld and left out to cry alone. Mothers and fathers watch as their children are told to walk right, walk left…

The lives unlived like a black hole in this world – six million exterminated within a 6 year period. Six million human beings. What knowledge was burned away piled unto others. Knowledge in medicine, the arts, life and knowledge which might have made this world a better place to live. Gassed, incinerated, shot and starved. Put through medical tests, torn apart, organ by organ…babies, children, adults used as guinea pigs.

Liberation began towards the end of 1944 – but the ashes were still reigning over the world. The future was destroyed. Six million human souls obliterated from this earth all because they were Jewish.

I have written before of the unknown losses – the written words, the peacemakers, the Doctors, the musicians, the humanitarians…

Another year passes and we will light the candles, observe moments of silence and say prayers. The world said, “Never again,” expressed so eloquently by Presidents and Leaders of the world.

“Never Again will this world stand by as hatred is used to exterminate innocent human beings.” Well, this past year we have witnessed on video innocent human beings being taken from their homes and killed. Words are spoken by the elected leaders of the worlds leading countries – yet the killing goes on around the world. In Syria over 100 thousand have been killed without any movement from the worlds leaders.

So we will remember as if we could ever forget. We will light candles, observe moments of silence and pray that God will intervene and “Never again,” will mean, Never Again, anywhere.

One thought on “Forever in Ashes”