Lydia answered the door without asking who it was. She had taken Groucho for his walk in the yard behind the building, had come back to her apartment, lay down and had fallen asleep.

Anthony knocked three times before she opened the door without even asking who was there. Dwight D jumped at Groucho and they played like toddlers on a play date. Anthony walked into the apartment and lay down on the bed next to Lydia. They didn’t even glance at each other – they just lay there and both slept the day away. 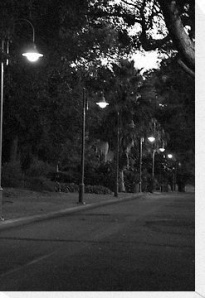 Dusk fell on the streets and the darkness seemed to cause a stir in the apartment. Groucho and Dwight D. were jumping on the bed and clamoring for attention. Lydia woke up nudged by the darkness and Groucho’s urgency. She saw Anthony’s silhouette to the left of her with Dwight D. nudging him awake.

“I was hoping this was you licking my face.” He answered.

“No such luck – maybe later. Lets take the President and the Marx Brother for a walk and pick up some coffee.”

Feeling as if drugged Anthony and Lydia both stood in the dark room and embraced. Despite the sluggishness there was a feeling of lightness in their steps. Lydia locked the door as Anthony called the elevator. The elevator came and Anthony walked inside to hold the door for Lydia. As she walked into the car they saw each other for the first time. Lydia dropped the leash and Anthony stared at her – awestruck.

“Anthony? What is happening?” She was frightened and instantly teary eyed.

“What else is there to think?” Groucho and Ike both started barking for freedom – the elevator took them to the lobby. They ran ahead and did their business by the tree out front. Lydia sat down on the bench by the entrance, Anthony beside her. They were in a traumatic state and had no idea what to do, where to go or what to say. Anthony stood up and walked towards the mirror which stood as a wall opposite the entrance. He stood there and stared at himself. Ran his hand though his full head of brown hair, touched his face and pinched his cheeks as if checking if he was in a dream.He made some quick movements as if trying to fool the reflection of himself in the glass.

Behind him came Lydia – smiled as she recognized herself as the friend she had not seen in some time.

“You are even more beautiful…”

“Handsome, right? I was a good looking guy.”

They sat down and held hands.

“I need to go to my apartment and lay down alone for a while – this is freaking me out.” Lydia said.

“Sounds good – call me if you need me before or ever.”

Anthony threw his keys on the table by his door, pulled off his jacket and sat down on his chair. He closed his eyes and he heard a song from the apartment next door?

“Crying, over you, Crying over you – Yes now your gone and from this moment on…” He thought to himself that it was odd to be hearing Roy Orbison – especially a song that was one that he had sang many times, coming from the apartment next door.

He closed his eyes again…

“Hey pop – you remember that song? You used to sing it in the shower all the time?” Anthony jumped up – just a dream – just a dream.

In the apartment next door “Yesterday” was playing now – not so unusual. What was unusual is the fact that he could hear music coming from there. Especially since his neighbor was an old man from Puerto Rico who spoke only fragmented english and never spoke or showed any signs of life.

“Granpa – the Doctor said you might be able to hear me. I just wanted to tell you that – well, we never did get to be close or anything. But – I hear you have a nice nest egg from the sale of the house and all – so I was hoping if, despite the fact that we barely speak or spoke – I can get some cash in your will?”

Lydia had gone back to her apartment and fallen in a deep sleep. She had felt wonderful and loved the way she looked. She was beautiful and young again. She was at peace. As she slept she had some funky dreams about her grandchildren singing her a song from “The Sound of Music” and each one telling her that they loved her. She heard her children each telling her how much they missed her and that they were hoping she would make the Passover dinner with them. She heard tapping and tapping – she jump startled and realized that someone was at the door. She said, “One minute, coming.” As she put on her robe and looked at the clock that said 11:14 pm. “Who is it?”

“Anthony.” He walked into her embrace – picked her up and took her to her room. His mouth on hers, her lips against his – he could feel her heart against his as he lay her down. Then with the vigor and need of a young man who has been alone too long – he made love to every inch of her. Lydia for her part was equal to the task and they went on for hours before they were spent and the sun began to shine onto their naked bodies – she looked at him and smiled. He looked back and smiled, laughed and kissed her.

“Dad – if you can hear me…I could be speaking to myself here – but whatever its worth the shot. I just want to apologize to you…I should have came to visit more often…”

“Did you hear that, Lydia?”

“Hear what? My heart beat?” She smiled.

“I don’t want you to…but there is a light shining and it might be calling us home.”

“I know – neither am I but, together. Let’s stay together.” She lay her head on his chest and he embraced her in a protective way. But sometimes despite our most gallant attempts there is no way to stop the world from dictating its own plan and changing destiny. Sometimes the more we resist the more we are forced into a solitary confinement with no parole, no way to open the door. The warden is silent despite our screams, cries and banging for salvation.  Silence. All we can do it bide our time, do what we can to keep our faith that this will all end one day and the our watching and waiting for salvation will arrive.

Anthony looked up at the ceiling and smiled – if this was heaven he was OK with it. He was tired of waiting, tired of being alone. He looked away from the ceiling and felt the warmth from the sun and from Lydia as she lay sleeping in his arms.