There was something there. We could all see it. In his eyes as he spoke about his wife who had passed away in “Good Will Hunting.” In his addictions – never have gotten over his good friend John Belushi going out the way he did.

When I was getting divorced the movie, “Mrs. Doubtfire” was released. It was the perfect way for me to introduce to my boys their new reality.

All my Love to You Poppet

This world has lost a comedian. This world has lost even more reason to laugh. I first saw Robin Williams ‪#‎robinwilliams‬  when he played a small cameo on Happy Days. He was Mork from Ork and I was inspired. Anyone who knows me well knows that my persona is similar to that of the great one. In a world filled with murder, hatred and no sense of the value of life – in this world where a deep laugh, a laugh that is uncontrollable that makes you feel as if you will, excuse the expression, pee in your pants is as rare to come upon as an alien who sits on his head…We have lost that someone who did just that.
The saddest part and the irony of life is that this man who spent hours on stage jumping, dancing, singing, mimicking the world just for laughs – was in a deep depression. This depression was one thing he could not laugh off.
So long Robin – King of Comedy. Thank you for the laughs 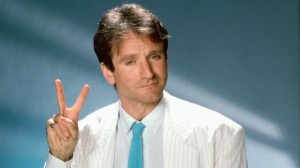 One thought on “Farewell Poppet”