A story about my family’s business – forty year anniversary

It was the Bicentennial summer of the signing of the Declaration of Independence, The Israeli rescue of 100 hijacked passengers in Entebbe, The Son of Sam claimed his first victim on July 29th, Rocky One was released, a test-tube baby was conceived, a Peace agreement signed between Egypt and Israel and there was a newspaper strike in New York City.

Carrie, The Omen and Network were in the theaters; “Your Arms are Too Short to Box with God”, “Godspell” and “Fiddler on the Roof” were playing on Broadway. On the radio songs with names like, “Silly Love Songs”, “Don’t go Breaking my Heart” and “50 Ways to Leave your Lover,” were filling the airwaves.

There was a strip of retail stores on Kings Highway in Brooklyn, New York between Mcdonald and Ocean Avenues. There was “Jerry’s Auction Outlet,” “John’s Pizza,” “Joe’s Variety,” and “Robert Hall.” on South side and across the way, “Brooklyn Savings Bank” I don’t recall what was adjacent to the bank.

On Kings Highway between east 2nd street and east 3rd there were assorted Middle Eastern grocery stores, a fruit store, a hardware store and a diner. Across the way was “Decorative Dinette,” “Lou’s Delicatessen,” “Elite Photography studio” and “Metropolitan Life Insurance.” In between the insurance and the photographer studio was a “Dungaree” store that had recently closed down. It was sometime in 1975 that my father and my Uncle Nat moved into that location and thus began the birth of “Whiz Travel.”

There were other locations prior to this one; Avenue U and West Street and Ave S and east 7th. There were other names prior to Whiz Travel. There was “Emek Tours,” “Zalta Travel,” and inexplicably, “Kings Bay Travel.”

But the name Whiz Travel stuck. By 1976 it was my father and mother who were running the business. They would be there from early in the morning until 7 or 8 o’clock at night. At the time they were unable to write their own tickets, instead they would purchase the tickets from a 3rd party or direct from the airlines. It was no way to grow a business.  My father wanted to be able to print his own tickets but needed to raise a specific amount of money to do so. He approached several people who doubted that he could succeed in a business such as travel in a location suited more for groceries or clothing than a “full service travel agency.” In the end there were two or three people who ‘bought into’ the business and were made minor partners. This gave them the ability to attend “Familiarization trips” to different locales around the world and to travel at discounted rates. This was the beginning of the future – the first ticket written was called the “Golden ticket.” I didn’t understand that because it was a ticket from New York to Washington DC for $99.00.

In those days all you needed to do was write the origin, destination, date and the form of payment. There were little stickers which were used to change the tickets by passengers and ticket agents. Those were legendary and invaluable. In those days the travelers were advised to “Go straight to the gate.” Each ticket needed to be accounted for by being put in a report to be sent to the Airlines reporting corporation each Tuesday without fail. That was my mother’s job and still is to this day. Each Tuesday you would hear her asking “where is ticket 7728 222 332?” or something to that effect. It was usually on my brother Maurice’s desk hidden somewhere beneath the rubble of paper and God knows what. Or on my father’s desk under a two day old cup of coffee stuck to the ticket which left its permanent circular mark.

The doubters still question the viability of the business. He would wave them away and say, “With God’s help, hard and honest business ethic, we will find a way.” He was never one to be told something was not doable. Between the presence of my mother by his side and his unyielding faith, he was emboldened to succeed.

Daily bus trips to Washington D.C., overnights to Niagara Falls and Philadelphia helped raise capital for the business but it wasn’t until he took a trip to Acapulco when the tide turned.

In Acapulco he made a contact at a hotel called, “The Condesa Del Mar.” He also made contacts at Eastern Airlines for a discounted group rate.

“How are you going to get that many people to come, Sam?” 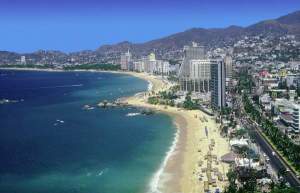 Back in Brooklyn he began the push. At that time the yeshiva’s had their winter recess at the same time the public school system did, from the days before Christmas until the Monday after New Year’s Day. In those days the majority of the community were retailers and the days leading up to Christmas were crazy. As were the days following Christmas. So a trip during intersession wasn’t a yearly trip to be taken for granted, it was a luxury reserved only for the wealthy.

“Acapulco! Money back guaranteed!” A sign was made and placed in the window. People came and my father promised them 10 days of perfect weather and a perfect vacation. My mother was livid, my brothers were speechless; my father? “Don’t worry.”

Within three years the vacations were moved to the end of January and my father had arranged for free upgrades at the Acapulco Plaza to a junior suite and reserved the whole Eastern Airlines flight on Thursday returning ten days later on Sunday.

My first trip alone with my friends was to Acapulco and it was there I had my first slow dance in a club across the street from the Plaza. I won’t mention her name because it probably meant nothing to her – but to me it’s a lifetime highlight. As I would walk anywhere in Acapulco people would run over to me and say how great my mother and father were. I would nod and say, “They really are amazing.”

Throughout the next 35 years or so the business changed; we were one of the first travel agencies to have an automated system (i.e. computers) in place. It was my father’s insistence to keep up with technology which thrust us into the 80’s, 90’s and the 21st century.

Two of my brothers and I worked in the agency alongside my parents. There were times we were so close to killing each other – there were times when we could not stop laughing. Looking back on it now, how amazing was it for us all to work together? Three brothers and our parents? My brother Marcos was the lawyer of the family so he had no desire to work with us. My brother Maurice moved to Israel in 1996 and I left the business in 2002. Charlie remains there and has kept the ship running smoothly over stormy waters throughout the years.

Looking back on those times working together, it’s easy to romanticize the past. We were young, we had jobs because our parents set us up with the family business.

Now 40 years later, my father passed away a year ago, although his presence is still felt in the smile of my son Saul. My mother still does the weekly reports and argues with everyone to be more organized while my brother, Sari and my son, Saul work with the lessons taught by my parents. The business is still a very important one for the traveler. A full service travel agent is always one phone call away for help when the flights have all been delayed or cancelled.

Through the door of 518 Kings Highway have walked men who were on front pages of newspapers, working men who survived the unimaginable and continued their survival tactics as working class heroes, homeless kids who came in for a quarter but were given a free lunch at the Deli courtesy of my pop. Jewish immigrants with not a word of english were told, “Go to see Sam Zalta, he will help get you settled.” Through the door at 518 Kings Highway walks an amazing woman who empowered the man by her side for 56 years. Their children and grandchildren all walk in with pride and wherever they travel all they need to say is Whiz Travel and an instant smile is hatched. You can’t buy a good name with money – a good name, hard work with integrity – that’s the golden ticket.

Forty years. These days terror seems to always be one step behind us; The Son of Sam is still alive yet behind bars, Rocky Seven was just released last year and technology has produced clones and printed vital human organs on 3D printers. The Peace agreement signed between Egypt and Israel still exists and New York City is still the center of the universe.

Paul Mccartney, Elton John and Paul Simon all released new music this year and are still touring around the world to sold out crowds. But these days the world is smaller, we can have a video conversation with someone around and out of this world instantly. An airplane, powered by Solar energy just flew around the world with no fuel at all. Like my father used to say, “It’s an amazing world, so much beauty, so much excitement.” Then watching as his grandchildren would crowd the apartment on a Friday night he would shout, “Rachel, can you buy this with money?” She would smile and take it all in. Nothing is impossible.